Sunday 18 January, IMC North-West’s regular ride day, dawned less windy than the two previous days, but not by much, and at least there was no rain in sight. It was none-the-less with some trepidation that a group of hardy souls gathered at the usual muster point, Pier 01 in Ulverstone at 10.30.

The healthy turnout for the event provided a lift to everyone’s spirits and the assembled bikes were examined with some interest – Peter Symonds was seen skulking with intent around the two fabulous 1199s, clearly casing options for purloining one from under the noses of watchful owners, while first-time visitor Russell’s Yamaha VMax made a very imposing presence on the Ulverstone wharf.

A quick consensus on the first leg of the ride was established, and the group duly set out before Symonds could enact any specific devilment of a criminal nature on the Panigales. We headed out east on the Bass Highway briefly, before turning south to track alongside the Forth River, past Harvest Moon Farm and down into the village. We went right at the Forth Pub, and then left onto the Wilmot Road, where the fun started. Folks who have done this run along the C132 will know why we are enthusiastic about it – great variety with sweeping left and right handers alongside the Forth River until you cross the bridge just past the Geiles Road junction, and then up Gentle Annie Hill and into the twisties… the only different factors this time were the strategically placed tree limbs across the road at various points as a result of high winds in the previous two days. Sunday
rides should never be dull, and the road heading towards Cradle Mountain fulfilled the criterion. 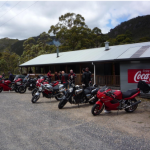 We gathered for a quick stop at Wilmot to compare notes and then charged on further south, heading up the C132 climbing towards Moina, where the mix of twisties and long satisfying straights continued, allowing us to blast out any remaining cobwebs. Matthew Carney was especially enthusiastic, as this was his first experience of this particular run. I imagine it won’t be his last. At Moina, we turned east onto the C136 and rode down the valley (yes, more twisties….) with a few actual hairpins to test us. The concentration and safe arrival of all was rewarded with burgers, chips, coke, coffee and not much salad at the Round Mountain Café, where the proprietors looked a bit stunned at the sudden appearance of 11 hungry bikers.

Mike and Russell left us after lunch and made their way separately back to Boat Harbour and Burnie respectively for other appointments. The remaining group headed out on the C136 again through Gowrie Park, Claude Road and then into Sheffield some 20 kilometres away. Again, this section provides a very satisfying experience, w 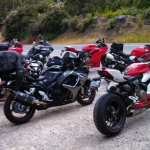 ith terrific scenery of the Mount Roland precinct on the right to distract riders from the road (that may not be a good thing in most instances). Anyway, we headed right onto the B14 from Sheffield towards Weegena, turning onto the short cut that is the Bridle Track Road. We went briefly right onto the B13 before heading down Weegena Road and then on to Dunorlan via its eponymously titled minor road (look it up, that’s what I did….) . All very enjoyable riding, and it was gratifying to encounter relatively little other traffic once we were
off the “B” roads. Michael Ward and spouse Jackie had left us just before Dunorlan to return to their home in Eugenana.

At the Dunorlan and Bengeo Road junctions our group splintered further – Peter and James headed back up to the Bass Highway briefly at Elizabeth Town before charging off left down the Railton Road (scene of the Tuthill Memorial Tank Slapper Shrine, see NW IMC report of February 2014) and thence to Latrobe and on home. Mick and Matthew headed back to Cressy and Launceston respectively while Jim, Louise and Phil headed back to the North West via Mole Creek, to continue the fun on different roads.
Another great ride was had, and we were delighted that Mick and Matthew from the northern IMC group could join us. All IMC members are warmly invited to ride with us next time on the third Sunday in February, meeting at10.30am in Ulverstone at Pier01 restaurant.