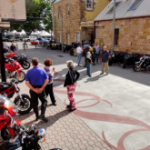 Despite the massive thunderstorm that hit Hobart the previous night, and waking up on club ride day to the sound of rain on the roof, the motorcycle gods were looking after us and cleared the weather up in time for our departure.

A healthy turnout of members, including John Astill and Mick Saunders from the north of 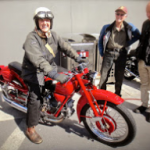 the state, resulted in a convivial atmosphere in Kennedy’s Lane that was only outdone by the arrival of Paul and Kerry Dickson on their classic machines. Paul was riding something British and therefore doesn’t warrant any further discussion, but Kerry glided in on her beautiful red Moto Guzzi Falcone in such a way that if Lady Godiva put in an appearance she would have got the booby prize (pun intended!).

It was great to see some familiar faces from the distant 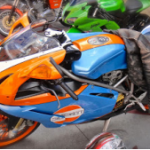 past roll up, including David Selley who took the prize for the most unusual paint job on his Ducati 999.

So after the reading of the riot act and an appropriate level of procrastination a large contingent of riders headed off to our destination of Derwent Bridge. The route selected was the most direct, which is down the Brooker to Granton and then following the Lyell Highway. Between Hobart and New Norfolk restraining the right wrist will ensure the keeping of ones license, however one can be a bit more liberal with the application of throttle once past Norfick. There was a bit of holiday traffic around that slowed progress a little, but we all got to the first regroup point at Ouse without  incident. 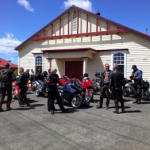 the first opportunity to evaluate the effectiveness of my first fork oil change on the MV. I had noticed in recent years that the feedback from the road through the steering wasn’t as good as when the bike was new, but the fork oil replacement seems to have restored my confidence in the front end. Interesting, because the oil I removed looked in good condition. Anyway, my advice is that if your front end doesn’t feel as sharp as it used to, change the fork oil. With cartridge forks it’s a right pain of a job, but in my case well worth the effort. Also bouquets to Motorworks for lending me a tool to do the job.

The road beyond Ouse goes through farmland before heading into the heavier forested areas. The Nive Valley where Tarraleah and Tungatinah Power Stations are located is great fun as the road
tightens up considerably and there are some serious elevation changes. Unfortunately Chris Tomlinson had a minor off on a tricky right hander going back up the Nive Valley. Both bike and rider were fine as fortunately Chris managed to scrub off most of the speed before he toppled off, but the scary thing was he stopped about a metre short of a ten metre drop, so the result could have been significantly more different!

The lunch venue was the Hungry Wombat Café which according to Trip Advisor is the #1 rated diningestablishment in Derwent Bridge. I had a cheeseburger and chips which were top notch and a snip at $8.50. After we were fed and watered we headed back from whence we came, bid farewell to John and Mick and completed a very satisfying 350 km ride. No wonder Charlie Boorman reckons it’s the best road in the world!

This entry was posted in 2015, Ride Reports. Bookmark the permalink.